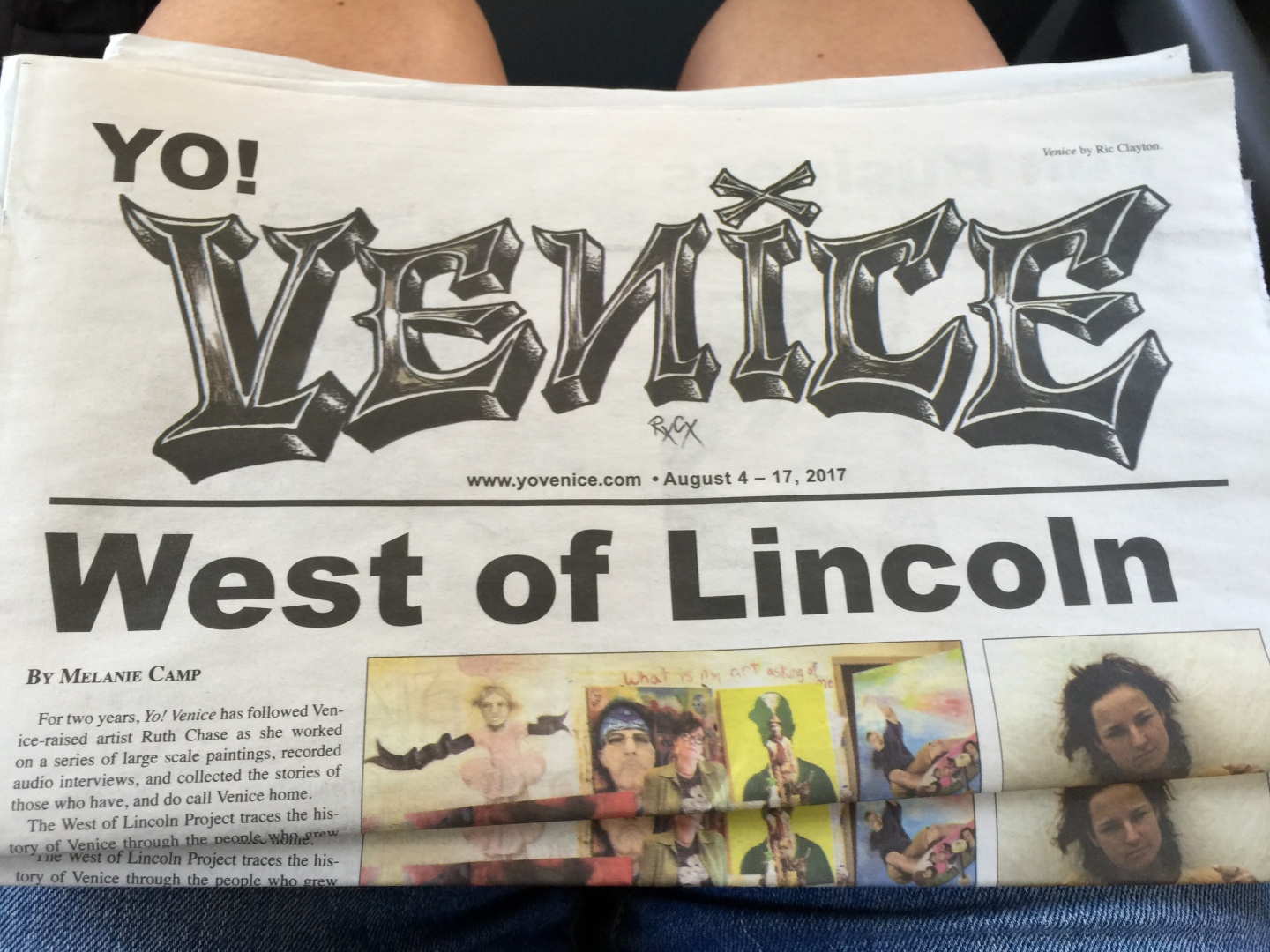 For two years, Yo! Venice has followed Venice-raised artist Ruth Chase as she worked on a series of large scale paintings, recorded audio interviews, and collected the stories of those who have, and do call Venice home.

The West of Lincoln Project traces the history of Venice through the people who grew up in the neighborhood. This Saturday, August 5th, at Venice Arts, the Project opens. On the eve of her exhibition, Chase shares how she feels about the changes to the community and why she will always be a Venice woman.

How do you feel?

Other than excitement, I have a little fear, some anxiety mixed in with a deep sense of love and pride from Venice. It’s been a journey that I have not taken alone, up to 300 people have participated in this project along the way. I suppose that is what has kept me going. This project has held a lot of emotion that has collected along the way. I’m not so stressed about the opening, I know the opening will be off the hook, my anxiety is more about showing up as a whole person when I have played small most of my life. Some will dig the paintings, but I think what makes this event powerful is that it is real and from the heart, mixed in with memories about the Venice that most people will relate to or go away with a greater understanding for a city that has all eyes on it.

What was it like hearing the Venice stories of so many people who grew up here?

It’s been life changing. I’m sure I have listened to well over a 100 Venice stories over the past two years. The other day I was editing the audio that goes with the West of Lincoln painting, and I couldn’t stop crying because everyone had this special bond with Venice, past, and present. It made me realize what a sense of belonging really is and that it doesn’t go away.  I heard once that you can’t know who you are until you know who you’ve been. Listening to the stories made me realize just how tough Venice was, not just for me, but for most people. People that grew up here tend to be authentic, outspoken, protective, passionate, and what you see is what you get kinda people.

Can you share an example of a particularly moving story you discovered?

Ohh that’s a tough one, they all moved me in one way, or another or I wouldn’t have been able to paint them. I think one that stands out for me is Gloria Olivas Omar because her insight was so unique. She titled her painting “Place of Strength” for a very moving reason. When I interviewed her, I knew she was completing treatment for stage four breast cancer. My first question was how Gloria was dealing with all of it. Her answer was that she held a vision of herself as a little girl. That her less than perfect childhood actually empowered her, that those years would serve her as an adult and fuel her inner strength. My take on it was that when children are hurt, they know only to look for love, that is their instinct, even in the worst of circumstances. As we worked on the painting over the three months, she impressed on me that it takes courage to love. If you have that, you win!

“Going through cancer was nothing compared to what I went through as a kid, but it has required the courage of that little girl from the beach. I never thought that the challenges in my childhood would be my source of strength, but it is. There is strength in innocence” – Gloria Olivas Omar

One other to choose from would be Ananda Jaynes photo submission for “West of Lincoln” painting. It’s an image of her holding her little brother Joe, walking down the boardwalk with their mom who would pass away from cervical cancer. Joe and Ananda wouldn’t see each other for over 30 years shortly after the picture was taken until Joe’s wife saw the image of the painting online and was able to contact Ananda. Now they are all meeting at the Opening for the first time in 30 years. That was awesome for me to be a small part of that.

You grew up in Venice. What were your thoughts on Venice before and then after working on the Project?

BEFORE: Growing up here I knew nothing else. The only thing that was clear in my head was that we were poor and that outside world looked down on where I lived and how we lived. It was us and them.

In 2014: I walked around Abbott Kinney Blvd., I felt sick to my stomach and confused. If I were visiting someone else’s home town, I would love all the fancy shops, the good hipster food, but not when it was in my Venice. It felt like I had landed in another time and I couldn’t identify anything I knew about “home” or as a place that I had ever been before. I felt very displaced. Where the fuck was I?

AFTER THE PROJECT: I can see now that I used this project to work out the multi layered relationship I had with Venice then and now. Now I see Venice as an energy; it’s alive, it’s ever changing, and it has people who live there that really, really care about it. My hope is that others will understand Venice better through these stories. That as Venice moves forward there could be an understanding of the energy that Venice has, and has always had, and to respect it and work with it, on both sides of the dollar.

Has the Project changed the way you think about Venice? If yes, how?

YES, BIG TIME. Now I understand why there is so much local pride and protectiveness about the outside world moving in. No different than any other small town, except Venice people have an edge. People think of Venice as LA but really it’s been a small town for a long time, many of it’s older residents staying primarily within its borders. Since this project, I can FEEL Venice, not just as a place or concept in my head, but as a living breathing place with energy that has a current running through it. I will never see Venice the way I did before because I know that the culture here is built on a vibe that shouldn’t be taken for granted.

What was the biggest thing you discovered working on the West of Lincoln Project?

Two things, one is that streets smarts have value and while street life is often romanticized by the mainstream. These life lessons are valuable to our culture, and for anyone who LOVES Venice, they could learn why and how Venice got to be the way that it is. If people want to keep Venice alive and real, they may want to understand the people who have lived here for awhile.

And secondly, I took much of my childhood that wasn’t great and was able to find value in the pain and suffering, which will forever change me moving forward. I no longer look back on my life and see it with judgment or ignore the dark days, but rather use my past to empower me.

Will you always be a Venice girl?

YES, anyone who grew up in Venice feels this way. When people ask me where I’m from I say, I live in Nevada City, but I’m from Venice. Venice is my emotional birth home; no other place can replace that. There is a quality inside me that makes me feel different from other people when I am away from Venice, when I’m with Venice sisters and brothers, I feel something that is the same.

The West of Lincoln Project exhibition is at the new Venice Arts gallery space, east of Lincoln, at 13445 Beach Avenue. Join the opening reception on Saturday, August 5th from 4:00 pm – 8:00 pm. The exhibition runs until September 1st.