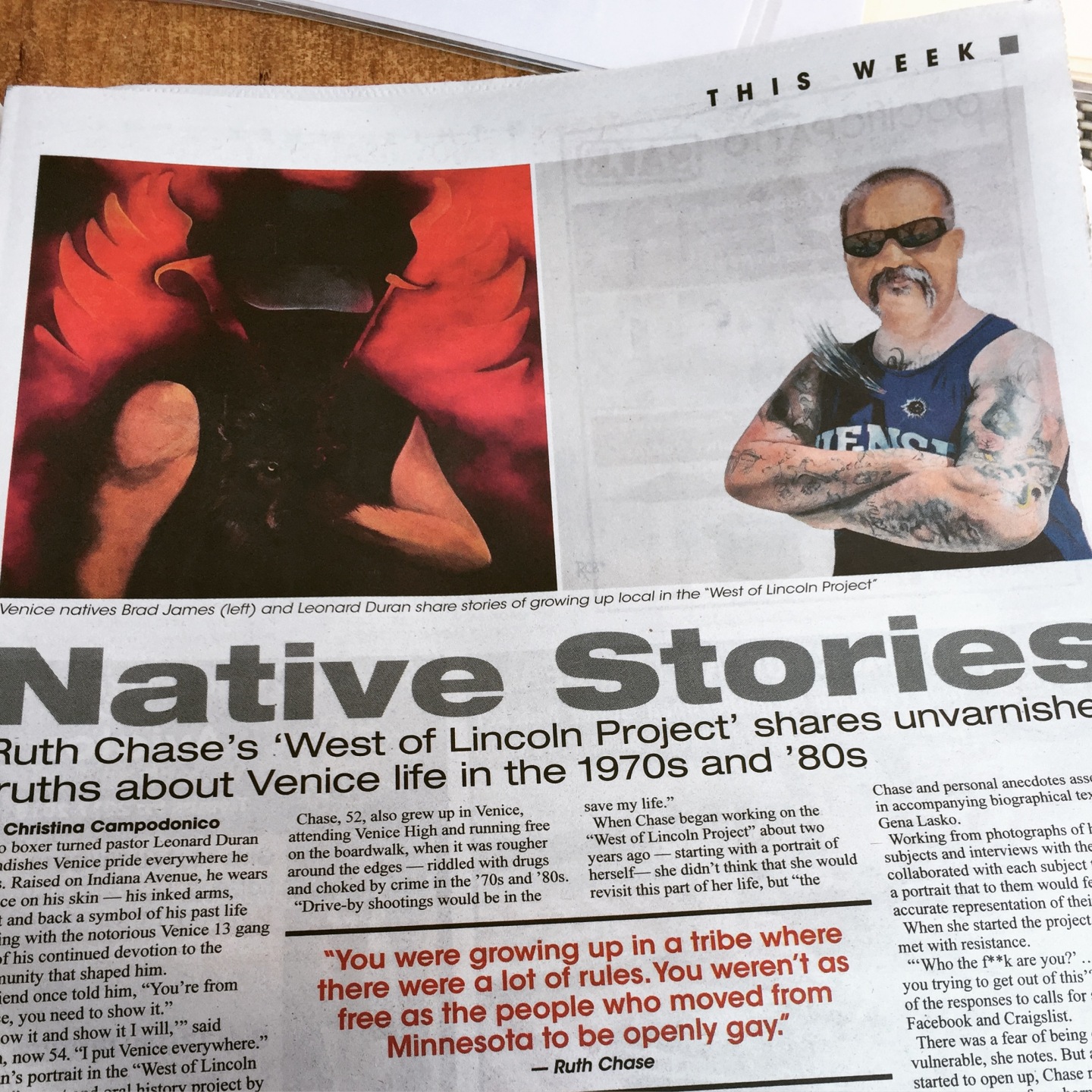 Pro boxer turned pastor Leonard Duran brandishes Venice pride everywhere he goes. Raised on Indiana Avenue, he wears Venice on his skin — his inked arms, chest and back a symbol of his past life running with the notorious Venice 13 gang and of his continued devotion to the community that shaped him.

A friend once told him, “You’re from Venice, you need to show it.”

Duran’s portrait in the “West of Lincoln Project,” an art and oral history project by artist Ruth Chase, shows his neighborhood pride peeking out: “Venice” tattooed around the base of his neck, “Venice” emblazoned on his royal blue tank top.

It wasn’t easy growing up in Venice — Duran’s dad was shot and killed when he was five years old — but it was home.

“I have good and bad memories of this place,” he said, “but it’s the place that raised me.”

Duran’s story and portrait is one of 12 featured in the debut exhibit of Chase’s project, opening at Venice Arts on Saturday.

Chase, 52, also grew up in Venice, attending Venice High and running free on the boardwalk, when it was rougher around the edges — riddled with drugs and choked by crime in the ’70s and ’80s.

“Drive-by shootings would be in the news on a regular basis. Helicopters would fly over the house every night. I would count the gunshots to see how many I could hear that night,” remembers Chase, who lived on Ocean Front Walk and Rialto Avenue as a child and now resides in Northern California.

“I remember it being labeled ‘the Drug Capital of the World Per Square Foot,’” she continues, recalling how drugs were easily available to young teens like her. “I had to move out of Venice basically to save my life.”

When Chase began working on the “West of Lincoln Project” about two years ago — starting with a portrait of herself— she didn’t think that she would revisit this part of her life, but “the portrait was all about me growing up in Venice,” she says. “All the bad stuff actually — everything that I was afraid of, everything that happened that was dark.”

So she started reaching out to people she knew from her childhood and friends of friends who grew up in Venice around the time she did, interviewed them and painted their portraits.

Combining personal history with portraiture, these paintings tell the stories of each subject with visual imagery by Chase and personal anecdotes assembled in accompanying biographical texts by Gena Lasko.

Working from photographs of her subjects and interviews with them, Chase collaborated with each subject to create a portrait that to them would feel like an accurate representation of their life.

When she started the project, Chase was met with resistance.

“‘Who the f**k are you?’ … ‘What are you trying to get out of this’?” she recalls of the responses to calls for subjects on Facebook and Craigslist.

There was a fear of being exposed and vulnerable, she notes. But as her subjects started to open up, Chase realized that hesitation came from born-and-bred Venetians’ loyalty to the neighborhood, its sense of tribalism and unwritten rules to protect, defend and show no weakness.

“People who grow up in Venice — I don’t know if it’s through the crisis or drama or community spirit — there’s an identity and a bonding that goes really deep,” says Chase. “You were growing up in a tribe where there were a lot of rules. You weren’t as free as the people who moved from Minnesota to be openly gay.”

What you were free to show was love for the community, something that Chase feels she has captured.

Duran echoes that sentiment about Venice.

“It’s a place where people grew up, took some hard knocks, took some scrapes on the knees and still came out to be pretty good people,” says Duran, who now mentors youth through his nonprofit WORK and coaches boxing at Oakwood Park. “We all graduated out of one of the baddest schools ever — the school of hard knocks in Venice.”

The need to hear these stories of hardship from native Venetians may be greater now than ever, notes Duran, as the community grapples with its decades-long transition from a gritty urban hood to an affluent beach enclave frequented by techies and tourists.

“It’s not just a place to come to the beach,” says Duran. “There wasn’t always Abbot Kinney. It wasn’t always like that. We’ve seen a big change.”

Venice Arts Associate Director Elysa Voshell hopes the exhibition will be a starting point for discussion between the new and old Venice.

“There’s people who have been longtime residents … and there are a lot of people who are newer to the community, and I think the exhibition is an opportunity for all aspects of the Venice community to have a conversation,” she says.

“The West of Lincoln Project” opens with a reception from 4 to 8 p.m. Saturday, Aug. 5, and remains on view through Sept. 1 at Venice Arts, 13445 Beach Ave., Venice. Free. Visit ruthchase.com for more info.